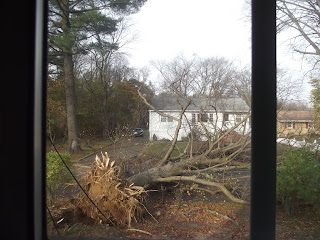 After 9 cold days without electricity, Pequannock's residents have had enough, and they are just the tip of an iceberg of growing frustration with JCP&L in the wake of Hurricane Sandy.

This writer, among others, feel that the beleagured power company should be broken up and sold at government auction as a monopoly which has failed to provide good faith service to its consumers at every turn.

Over and over, politicans tell us how Hurricane Sandy could have been worse.  Thank God it wasn't, but if it had been?  JCP&L already failed to power Chilton Hospital for several days, has been so inept at prioritizing calls and mobilizing crews that our children have not attended school in approaching 2 weeks, and has even depressed our local economy even further by failing to power local businesses which provide the bulk of jobs within the community.

Some businesses have even undergone the expense of renting or purchasing gas generators, which is great news for hourly employees who still have to pay rent and mortgages, but are unlikely to receive unemployment benefits for the time their businesses have been closed.  These generators of course pose a safety hazard in operation, noise, and fumes, as well as creating an additional draw on the already crisis-level gas shortage, but perhaps a reasonable risk given the benefit to the economy.

Jersey Central Power & Light has provided neither to entire communities for over a week.  This, a result of poor planning by the corporation and a desire to prioritize profits ahead of disaster planning.  If Jersey Central cannot provide "power & light" to its customers than those customers should be able to go to a competing energy company to purchase those products, just like any other industry.  Entire communities should have the bargaining power to demand better service, or after the vote of no confidence demonstrated by Hurricanes Irene and Sandy, a whole new energy company, one that puts the customer first.

Lobbying by energy companies such as JCP&L discourages competition and helps create the monopolies which prevent reliable and safe customer service in the energy industry.  More and more residents in Pequannock speak about purchasing generators and natural gas generators to get off the grid at times like this, but the point is, residents have a right to reliable power and to the products they've paid for.  JCP&L has failed to fulfill hundreds of thousands of energy contracts as well as to act in good faith in their relationship to their customers.

Today is election day and win or lose, any politician who hopes to stay in the game in New Jersey had better take note of the gas lines, the trees still blocking streets 9 days after the storm, the cold, frustrated voters which they hope to represent, and know that the region will not soon forget how energy companies failed them when they were at they needed help the most.

When the NJ State Senate holds an inquiry into the circumstances that allowed JCP&L to leave New Jersey in 3rd-world conditions for 2 weeks, I look forward to receiving their subpoena to speak directly about the disaster and its impact on our community.

If you're without power (electric not political), JCP&L advises you to call 1-888-LIGHTSS to report the outage, whether or not you want to waste your breath and your cellphone battery in so doing is up to you.