Saturday August 18th 2012, Madison Street residents took to the street in celebration of the neighborhood's year of recover post-Irene.  Just days before the actual anniversary, young and old alike came out to listen to local musicians and share barbecued meals cooked on the lawns of their freshly cleaned and painted homes.

While celebrations cannot remove the pain and loss suffered during Irene, that's hardly the point, as Pequannock's citizens have spent 365 days gutting and repairing homes, doing work to improve the quality and appearance of their homes, all the while getting on with the usual 9-5 grind of life.

Elsewhere in town, the Glens held their annual block party.  Indeed, the whole of Pequannock earned its right to celebrate this August whether directly effected by Hurricane Irene or one of the many volunteers who   came out to help in the aftermath. 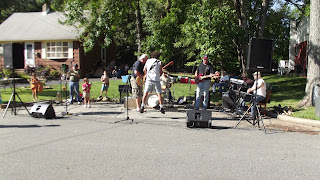