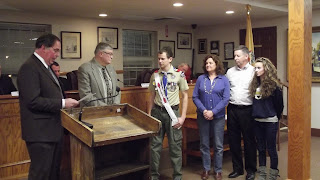 At the Pequannock Township Council meeting on Tuesday February 28th, 2012, Stephen Robert Smith of Pequannock was congratulated by the township council on his achievement of the rank of Eagle Scout and thanked for his service to the community.  The young Mr. Smith built not one, but two informational kiosks for the township, the second having been built after Hurricane Irene opted to remove the first. 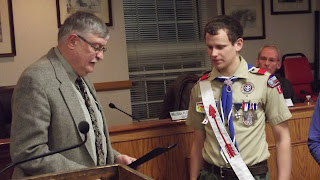 Acting beneath the auspices of the leaders of Troop #77, Smith actually exceeded the requirements for obtaining the rank of Eagle Scout.  Here, Smith is awarded an official thank you by Councilmen Vanderhoff and Engelbart on behalf of the entire town council. 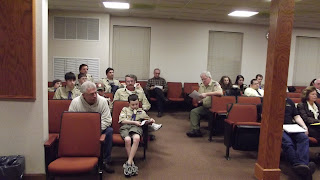 At the same council meeting, leader James Iorio assisted several Cub Scouts from Pack #79 and Boy Scouts from Troop #144 in presenting to the township council their accomplishments for the previous year.  They also spoke about their plans for the next year and the importance of scouting in our community.