45 Years of Service and the Knights of Columbus Still Shine 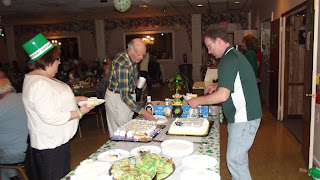 Saturday March 17th, in their 45th year of service to the Pequannock community, the Knights of Columbus #5943 once again hosted their annual St. Patrick's Day event.  Many familiar faces were in attendance and on the dance floor.  Dinner consisted of what can only be described as a herd of corned beef, expertly prepared with a buffet of other dishes, followed by cake and pastries for desert.  The kitchen was abuzz with preparations, lead by Grand Knight Pat Keaveney and a cadre of other knights.  Equally impressive were a well attired bagpiper and a young girl skilled in step-dancing.  It seems likely that every stitch of green in a 5 mile radius was worn that night and a ways into the next morning as well.

The council itself was chartered in 1967, named after the late James Johnston Navagh, Bishop of Paterson.  45 years later, the group is still going strong, providing meals for the flood effected during Hurricane Irene and many other services to the community.  Some other activities include blood drives, recycling, and public outreach efforts. 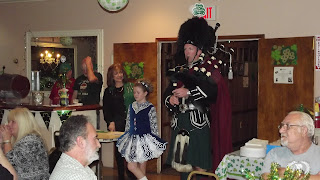 Congratulations to Knights of Columbus #5943 on their many years of service!  The Pequannock community certainly looks forward to many more.

For more information about Knights of Columbus #5943 events: http://www.kofc5943.org/