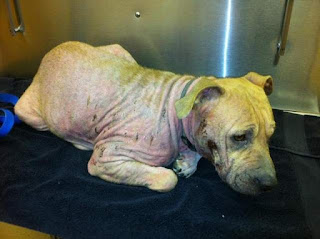 Anyone with information about a pitbull found severely injured beneath a home on Pequannock's Caroline Ave is asked to contact the township police.

Now nicknamed "Honey" for a small patch of remaining fur on her ear, the pitbull mix was found cowering under a porch after a chilly 15 degree night last week.  Honey had almost no fur and open lesions on large portions of her body.  Honey also appears to have been nursing, so locating her pups might help in locating her abuser.

Unsurprisingly, no calls have come in attempting to located Honey, giving credence to the idea that Honey was likely abandoned to die in the Winter weather.  Honey has undergone testing for mange and ringworm, received treatment at a Wayne veterinarian, and is now recuperating at the Pequannock Animal Shelter.

Any information about the owner or honey colored pitbull mix pups for sale nearby, contact the Pequannock Police Department at 973-835-1700